Cord blood stem cells are used in two broad areas of medicine. Since the first cord blood transplant for Matt Farrow in 1988, cord blood has been used in over 40 thousand transplants worldwide for 80+ diseases.
The use of cord blood for transplants is considered a “homologous” application of the stem cells, because the therapeutic stem cells perform their normal function of populating the immune system. The second application of cord blood stem cells is in advanced cell therapy, where the cells are either manipulated or performing a non-homologous activity. The most well-known example is regenerative medicine to treat neurologic conditions with cord blood, such as treatments for cerebral palsy or autism, and the first child treated was Abby Pell in 2005.
Umbilical cord tissue has only been used as a source for cell therapy since 2007, and all of the therapy falls into the category of advanced cell therapy. It is often assumed that the only active cell type found in cord tissue are the mesenchymal stromal cells (MSC) in the Wharton’s Jelly, but in fact a small number of trials use endothelial cells from blood vessels in the umbilical cord or epithelial cells from the lining of the umbilical cord. 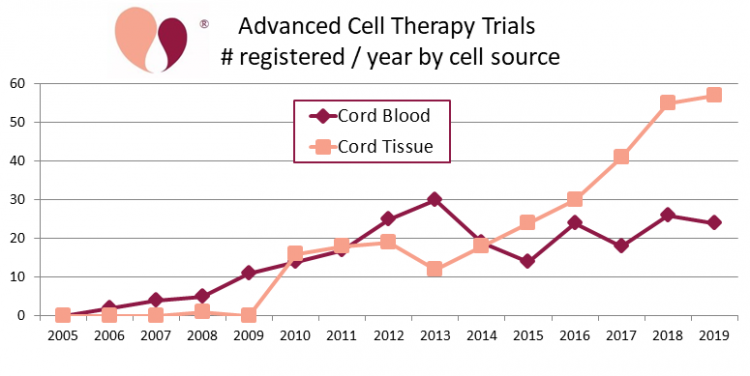