Gracie has autism, a condition that affected nearly every aspect of her family’s life after she was diagnosed at 2. But a new study is offering hope for the Gregorys and families like them.
Gracie was one of 25 children who took part in the first-of-its-kind study at Duke University in Durham, North Carolina. The goal: to see whether a transfusion of their own umbilical cord blood containing rare stem cells could help treat their autism. 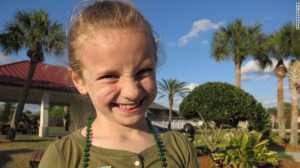 The results were impressive: More than two-thirds of the children showed reported improvements. A larger second trial is underway, one its researchers hope will lead to long-term treatment for children with autism.
Skeptics say there are too many unanswered questions to get excited. Even Duke researchers acknowledge as much. The initial trial, published Wednesday in the journal Stem Cells Translational Medicine, was a safety study, not a controlled, double-blind study with definitive proof of positive results. This study was open-label, meaning everyone — the doctors and the families — knew that the therapy was being administered.
But for the Gregorys, the change in their daughter has been monumental